Yesterday was the five-year anniversary of my mother’s death. I hadn’t realized it until I got an email from my little sister. I had entered the date on my Google calendar but obviously something is out of whack. (I should have smelled a rat when Palm Sunday showed up on a Thursday).

The longer I live the more I realize how lucky I was in both my parents. As I was an eccentric loner even as a child, for years they were my closest friends. At their funerals, each of them was described to me as “a saint.” They weren’t saints, but they were admirable and always honorable. What a gift. What an example to try to live up to. As shorthand I have always said I was raised by Mr. and Mrs. Atticus Finch.

Actually, Mom was more like Scout Finch, all grown up. At twelve she could whistle on her fingers, bait a hook, pitch a baseball, ride a horse, shoot a rifle, drive a truck, and gig a frog. She was the same age as Scout and Dill — Harper Lee and Truman Capote — and grew up a stone’s throw away from them in rural small-town Alabama of the 1920s and 30s.

But the truth is Mom was an original. Whereas DH and Jon tease me how often I exclaim, “He reminds me of Dad” — about any example of dignity and probity (George Washington, Jim Lehrer, Clark Kent), particularly if that example has a Southern accent — I’ve only met one person in my life who reminded me at all of Mom. And as a small Catholic firebrand, Jane was really nothing like my mother in any particulars. She was like my mother in her generosity of spirit, her determination to keep growing and expanding as a human being, her cheerful optimism and lack of complaint despite life’s blows. These qualities were the essence of Mom. I’m afraid I don’t have any of them, but then Mom was a rare bird. 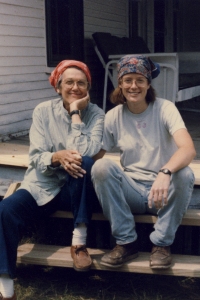 Mom had the knack of making each of her very different five children feel valued for exactly who he or she was.

This is one of my favorite photos of the two of us, taken in 1986 on the porch of the house I bought for $19,000. We both look like a couple of bums. She, Dad, and I were stripping paint, rewiring lamps, planting a garden, and building stairs that week. With me, Mom was a tomboy, rolling up her sleeves for the next project.

I’m not sure what Mom would think of what I’m doing these days. She told me once that she had decided very young, growing up in farm country, that she would not marry anyone whose work had anything to do with the land, as she didn’t want her life dependent on the weather. But of course I’m just hobby farming, puttering on a large scale.

She worried about my loner tendencies. (She would have been sad when I was laid off from teaching.) “Who will you talk to? The pigs?” she asked mildly when I hired on as a farm manager. On another occasion she sighed, laughing but resigned, “Oh, Sel, you have dirt in your blood.” Yet for all my shortcomings and oddities I always knew I had her unfailing acceptance and love.

Someday I would like to try to capture my mother in words. However I think my older sister may have put it best. When Mom died, N. said, of us children, “We’ve lost the closest thing we’ll ever know to the love of God.”

I have been missing both my parents. I think of each of them almost every day — when I see a bird, when I use a tool, when I struggle to problem-solve whatever challenge, when the look of a tree against the sunset fills me with joy. They are constant companions in that sense, and always will be. But when life is hard or worrying, I particularly miss the comfort of being someone’s little girl.

I found these photographs recently and am going to have them cleaned up, printed, and put in a twin frame.

This entry was posted on Thursday, March 5th, 2009 at 8:10 am and is filed under Uncategorized. You can follow any responses to this entry through the RSS 2.0 feed. You can leave a response, or trackback from your own site.