With my leg out of commission last week, I decided to work on tasks that didn’t require a lot of walking.

Back in 2005, when clearing the south pasture, Allen had buried tons of stumps. Since you’re not allowed to burn stumps here, we hadn’t had a lot of options. 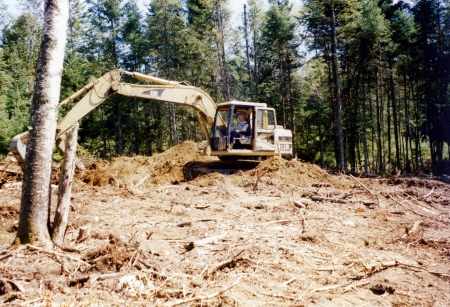 The problem with burying logs and stumps is that though you try to pack dirt firmly around them, there are always hidden pockets of air. Eventually the ground settles, the dirt falls away, and these air pockets develop into narrow holes twisting down between logs. The holes may be six feet deep. Leg-breakers for livestock.

In June, when D was at the farm with his Bobcat, I asked him to break up one of these swiss-cheese areas with his bucket.

D dug down and smashed the now rotted logs, pulled one intractible stump and dumped it over the fence into the woods, tucked the rocks deeper, and firmly crushed the surface. No more holes. However now I had a couple of ten-foot-wide craters.

I needed fill. Dirt would be best, but I didn’t have any and couldn’t think how to get it. D mentioned that our town dump sold sand for five dollars a bucket-load. I’d immediately put Fill pasture holes with sand on my list. Now, limping around three months later, I thought it would be a good time to use my arms to shovel.

Sand is extremely heavy. The nice young man operating the loader at the dump dropped it into my truck bed with a wary eye on my tires. Driving back to the farm the truck creaked and groaned.

It took two loads to fill the pasture craters, and as I shoveled and pitched the damp sand, breathing hard, I reminded myself, “Many people pay to get this kind of exercise!”

When I was finished I had two large sand traps. Back to the dump for a load of compost, also $5 per bucket.

Compost is lighter than sand and the smiling young man was able to fill the truck to the gunwales. “Oh, call it one scoop,” he said cheerfully when I asked him what to say at check-out. 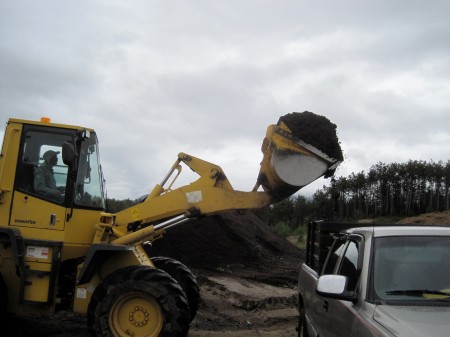 I spread compost over all the sand. In the next couple of weeks I’ll rake both areas and and sow winter rye. 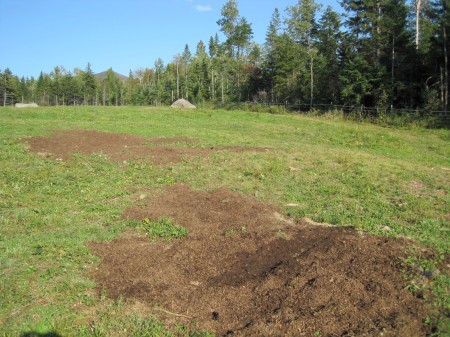 The craters are gone. Total cost, $15 and sweat.

This entry was posted on Sunday, September 18th, 2011 at 6:04 am and is filed under Uncategorized. You can follow any responses to this entry through the RSS 2.0 feed. You can leave a response, or trackback from your own site.