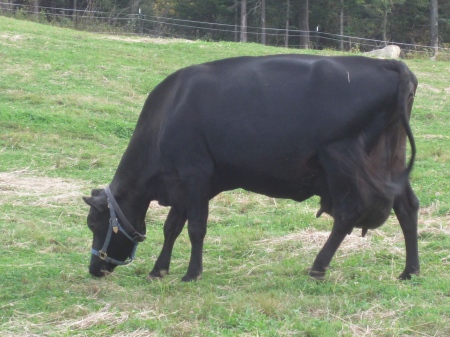 David, my vet, came out to the farm on Friday. I am always happy to see him, especially when it’s a routine farm call ($65 to drive out) rather than an emergency ($100).

He came to give Katika, Moxie, and Birch their annual shots, vaccinate Fee for the first time, float Birch’s teeth, and do a follow-up check on Katika’s udder.

All the animals were in their stalls, waiting, and I went to let Katika out as usual to walk into her stanchion. Before opening her gate, I asked David to move back.

“Since I’m always here alone,” I said casually, “I’m really the only person she knows.”

Katika stepped out of her stall, shoved her nose in the tiny crack between the closed barn doors, with a thrust of her powerful neck threw the heavy 6’x8′ doors open, and leapt out of the barn.

I was so startled it took me a moment to realize what was happening. I laughed as I ran after her. She is too big and old to gallop but she was certainly sashaying down the farm driveway as fast as she could go. She was not wearing a halter and it took me five minutes to get her back into the barn.

The heat has left Katika’s udder, and the swelling has gone down, but the entire right side remains engorged and stiff. David was pleased with her progress. He is now sure that the swelling was caused by injury, probably a blow from my overenthusiastic teenaged bull as she was coming into heat. The mild mastitis was a secondary problem that developed due to my inability to empty the inflamed quarter. Katika is now off all meds, though I’ve had to wrap her right heel in duct tape to protect the low-hanging bag from her sharp dew claws.

David warned me the damage to her udder was likely permanent. He believes the bag swelled with blood (not involving the milk ducts) and that while the serum in the huge blood bruise is slowly being re-absorbed, the blood cells themselves will remain silted in the tissue as scarring.

Last year Katika had an injury, probably from a horse kick, to her other back quarter, and I had watched the same progression. She’d had a knot the size of a softball in that quarter for almost a year. It was still the size of a hockey puck when she freshened in July.

“But now it’s gone,” I pointed out hopefully to David.

“But that was a much smaller injury. This is massive.” The area of hard flesh in this quarter is about the size of a football.

Katika is nine and a half, twice the age of the average dairy cow (though cows can live to 15 or even 20, they are usually culled at 4 or 5, before the complications of middle age). Prior to this injury, her bag hung so low in this lactation that it was growing tough to fit my hands between her teats and the milk tote. I had already been thinking that someday I might need to transition her to becoming a nurse cow, raising her own calf plus a couple more on the excess milk. A calf would have no problem stooping to nurse from a low udder.

However with the news that this current damage might be permanent, my thinking must get sharper and more clear. Butchering her for meat is one option, of course — “You’d get eight hundred for that old cow at auction with the price of beef these days,” my hay man urged me in August — but not one that I could easily face. I have crouched under Katika’s side to milk every day for years. We are old friends. Yet I can’t afford to keep a giant pet cow. Making her a nurse cow wouldn’t be a perfect solution — Katika is actually not fond of foster calves — but it would be a solution.

Of course this would hinge on having another cow in milk. Moxie!

During his visit I had David pregnancy check Moxie automatically. I had seen her bred so many times, in my mind the palpation was merely a formality. I hoped he might be able to estimate if she was due in February or in April.

Moxie is not pregnant. I couldn’t believe it, and actually thought David must be mistaken, but last night I saw Moxie attempt to mount Katika. She was obviously coming into heat.

An Ohio dairy farmer had emailed me last fall when I rescued Moxie, warning that with her terrible health history as a calf, Moxie’s reproductive system might be scarred. I had crossed my fingers and hoped for the best. Now I am worried.

My bull, Duke, goes to slaughter November 1. There is a chance Moxie was bred last night, and maybe one more chance on Halloween. On the other hand, there is also the possibility that Duke himself is infertile — in which case neither Moxie nor Katika will be bred this year. Sigh. So much for making plans.

In November I will ask my friend Alison, a nurse, to help me with a blood draw from both cows, and I will send the samples out for pregnancy tests. At least I will know where I stand.

This entry was posted on Tuesday, October 11th, 2011 at 7:56 am and is filed under cows. You can follow any responses to this entry through the RSS 2.0 feed. You can leave a response, or trackback from your own site.

2 Responses to A Sobering Vet Visit