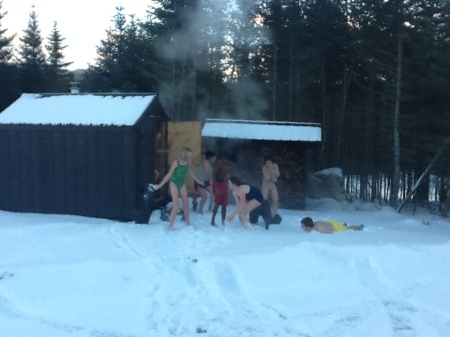 It is -14° F this morning. The farm is coated with heavy plate ice with a few inches of powder on top. Walking is difficult. The horse and cows constantly slip and catch themselves. The water hydrant in the barn paddock froze solid. However a school group of cross-country skiers came over yesterday after their ski to have a sauna. In the photo above, they are screaming happily and rolling in the snow.

The sauna is one I built for DH for our 25th wedding anniversary, out of my old toolshed. Though insulated and panelled, it is not elegant; I haven’t yet gotten around to building cedar benches, so users sit on my mother’s old kitchen chairs clustered close to the wood stove. Nevertheless a bucket of cold water poured over the hot sauna rocks produces a satisfying steam. I could hear the children squealing all the way from the barn.

D came out after work yesterday to help me with my frozen water. He had lent me his heat gun to try to defrost the hydrant, but after five minutes struggling to keep on my feet on the ice while wielding a plug-in metal gun next to an electric fence and over a giant tub of water, I’d given up on the job, sure I would be electrocuted and die. I called D and told him that I’d tried to tighten the set-screw, but that hadn’t worked either.

“Don’t even touch it, you’ll only fuck it up,” he said shortly. (The boys who know me have a clear idea of my skill level.) “I’ll bring my torch.”

A few hours later I watched him sitting on a wooden stool in the snow, heating the pipe with a flame. Years ago I brought that stool down to the farm for his father, Allen, who sat similarly in the snow, wielding a torch, many, many times. This “frost-free” hydrant has never worked properly since it was installed. His father has dug up the hydrant with a backhoe to try to fix it, not once but twice. I have wrapped the pipe in electric heat tape. Still it freezes below ground.

D is as silent as his father is, but where Allen is usually whistling under his breath, D is usually scowling. Over five months of making diabetic lunches for him, however, I have learned that his gruff rudeness is mostly an act. He has been very kind to me.

After an hour of silent, patient work with the propane torch, steam began boiling out of the hydrant faucet, and finally the water flowed. D readjusted the set screw. I re-wrapped the pipe in heat tape. I’ll hope for the best.

“Let’s look at that door,” D said, as he stowed the torch in his car. I had told him that one of my big front barn doors had fallen off its bolt in the recent windstorm.

I have had the big door propped up on blocks. I’d thought vaguely that once the wind stopped banging and it was warm enough to have my hands out of gloves, I could lift the door to the proper position, fit my hand inside the sliding mechanism, and restore the crucial nut to the end of the bolt.

D looked at the mechanism with narrowed eyes. “You ain’t never gonna get that nut in there.”

He decided the only thing to do was take the door off the barn. To get that door off, we had to remove both. Each door is 6×8 and weighs over 100 pounds. In the fall I had sunk a row of steel t-posts at the edge of the barn to keep Mike from plowing snow into my pile of stored materials. Now those t-posts were exactly where we needed to move the doors, 4-foot tall sharp spikes set in a sloping, slippery sheet of ice. The stool we were to stand on skittered and slid over the surface.

“Workin’ in a fuckin’ deathtrap,” D observed mildly. It has always interested me that petty annoyances ignite his hot temper but with real problems he is calm. He took his leather work gloves off and fitted them over the top of the dangerous metal spikes. It was 10°.

In less than an hour (including a break to thaw out in my truck with the heater blowing full blast) we had the doors down, the sliding mechanism fixed, the doors rehung, and the wooden stopper screwed back into the end of the metal track. D did it all while I lifted or pushed at his direction.

He was just getting into his car to leave when the children pelted down the driveway, slipping and falling, on their way to the sauna. D would not take any money. I shall have to find some delicious low-carb treat to cook for him next week.

At dusk, when the school van tried to leave, it slid on the ice completely off the driveway. I paused in my barn chores to try to pull it out with my truck, lying in the snow and grunting to hook up the chains. However even in four-wheel drive my truck could not get enough purchase on the slippery hill. In the end another vehicle came to pick up the students, and the big van was left beached on the ice, to be dealt with today.

Winter has barely arrived and already I’m sick of it.

This entry was posted on Sunday, January 22nd, 2012 at 7:11 am and is filed under children. You can follow any responses to this entry through the RSS 2.0 feed. You can leave a response, or trackback from your own site.

One Response to Slick Ice and Sauna Time