I have weaned Katika’s six-month-old heifer calf. Phoenix is a big sturdy girl, does not need the milk, and was gulping down the supply with such enthusiasm that by the end of each day there was little left for Opie, the three-week-old bull calf, and nothing for the house.

I had been wanting to wean Fee for over a week but with the temperatures lurching far below zero, I’d hesitated to put the plastic weaning ring in her nose. I have seen the weaners crusted over with ice from the calves’ breathing and the sight is alarming.

But with Monday’s warmer temperatures, it was time. I tied Fee in her stall, slipped the weaner’s rounded prongs into her nostrils, and tightened it gently.

I have never seen a calf have Fee’s reaction. When I turned her out, she tossed her head almost upside down to stare at the sky, staggered, and nearly fell down.

I began to worry. I had done exactly what I always did. The weaner works like a screw-on earring; though it must feel odd, it does not hurt. What could be the problem? No steer had ever behaved like this. Fee continued to stagger and swivel her head drunkenly like a collapsing calf marionette. I watched in concern for quite a few minutes before I realized that this was just teen girl drama.

When I turned out Katika, Fee rushed to her and shoved her head under her mother’s bag. Katika stood patiently, barely wincing as the sharp points pricked her udder. However the weaner’s design prevented Fee from grasping a teat in her mouth. Though drooling with eagerness, she could not nurse.

Whenever I looked outside that day, I saw Fee mutinously shoving at Katika’s bag. Her hind legs were coated with diarrhea. (Cattle respond to any distress by immediately evacuating their bowels.)  Her body language telegraphed her outrage.  I protest!

Yesterday, when I turned them out in the cold rain, the storyline was exactly the same, but the tale was much shorter. 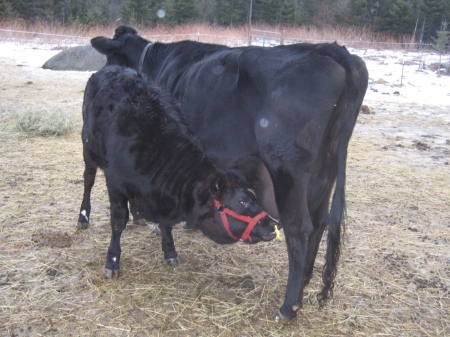 I’m sure everything will be back to normal today.

Oh no! Still can’t grab it! 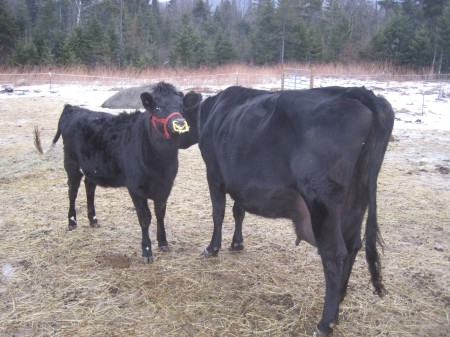 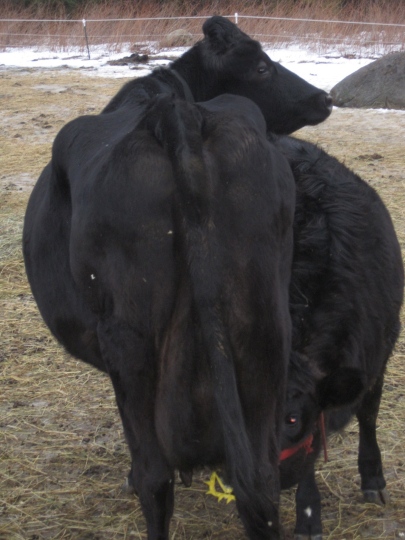 This side of Mama will surely work.

In less than ten minutes, Fee was eating hay. In a few days, she should give up and stop pestering her mother.

This entry was posted on Wednesday, January 25th, 2012 at 7:13 am and is filed under cows. You can follow any responses to this entry through the RSS 2.0 feed. You can leave a response, or trackback from your own site.