Or, How to Put Away Electric Netting Without Losing Your Mind 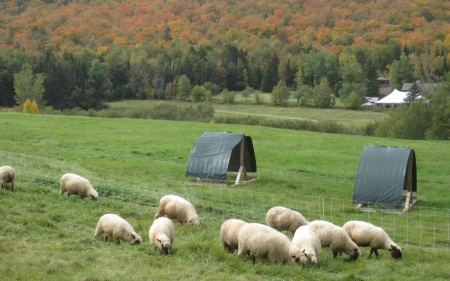 I love portable electric netting for livestock. For years I have used Premier1’s ElectroNet and a battery charger to move my sheep around my farm and Betty’s pasture down the road. It’s a terrific product, the gold standard.

The only problem comes when you have to put the stuff away and store it for the off-season. This is a job I always dread. In fact I’ve been known to take down the fencing and leaving it lying on the ground for days or even a week while I gird my loins.

But eventually Mother Nature will remind you to get a move on. 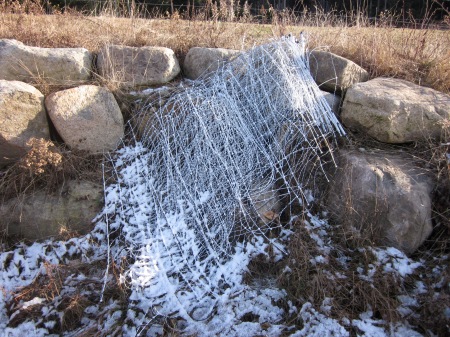 This is how ElectroNet looks when Premier1 sends it to you.

It will never look that way again.

Every year, putting away my fences for winter, I have tried to duplicate Premier1’s original packing. I gather all the spiked posts in one hand, and bind them together with baling twine. Then I attempt to shake out the pleats of 164-foot netting, roll them to the posts, and tie the whole thing.

Sadly, even if I take twenty minutes per roll — which feels like forever if you are facing ten nets — the result is invariably sloppy. The pleats of 35″ netting somehow slide apart to be almost six feet wide. The messy bundles remind me of dolphins thrashing to escape. 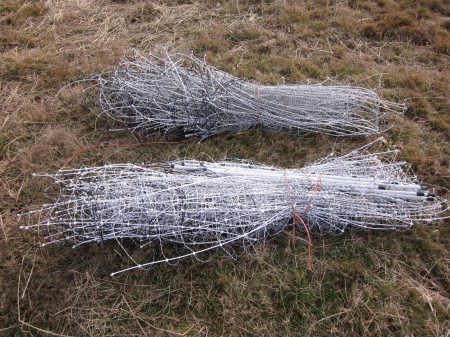 This would not be the end of the world, except that I know messy netting is soon tangled netting, and doomed to be a headache in the spring. So I always struggle for neatness.

Two days ago, by the third net, I was discouraged. I have large hands for a woman, with very long fingers. Still, they were inadequate. I was not able to keep a firm grip on the posts while I tried to straighten the rumpled folds of netting. What I really need, I told myself, is super-strong fingers twelve inches long.

Aha! A brainwave. I decided to build a fencing jig.

The device I came up with worked perfectly and as I built it out of scraps, it cost me nothing. If you have to buy the materials, it will set you back about $10.

Since I use portable fencing all over the farm, I needed my jig to be similarly portable. Thus I planned it around my battered farm truck.

I cut an old 12-ft 2×4 into three pieces: one 6-ft stretcher bar and two 3-ft legs. I trimmed the lower 6″ of the legs to fit in the side pockets of the truck. Then I took a scrap 4-ft, one-inch dowel and cut it into three 16″ rods. These would be my “fingers.” I drilled three angled holes into the stretcher bar to hold them. 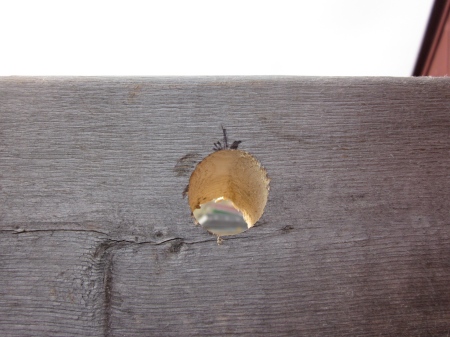 (Since I knew the 2x4s were not thick enough to stay rigid in the truck pockets, I knew the device would tilt forward slightly with the weight of the fencing. Angled rods keep the nets from slipping off the jig.)

Then I fastened the stretcher bar to the uprights with four 2.5″ deck screws at each end. The jig would have been stronger with bolts, but I didn’t want to take the time. This was not a precision project; I knocked it together in fifteen minutes. If you have more time, go for it!

To work with ElectroNet, I tapped two of my rods into the holes. 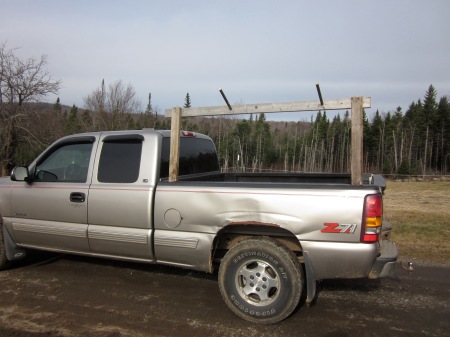 Now I drove around the farm to each waiting pile of netting.

Gathering the posts as usual as if I were going to move the fence, instead I fed each post in order over the rods. 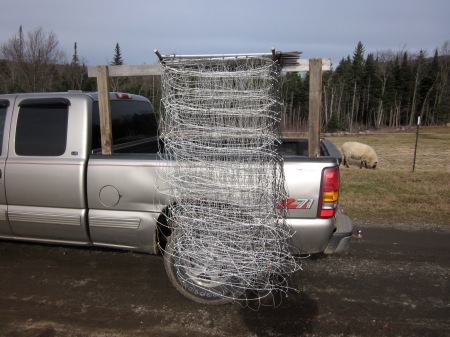 With the posts held firmly it was easy to find all the edges of the pleated netting and shake them straight. It was much like flapping wrinkles out of bed sheets to fold them with a partner, except the jig was my partner. 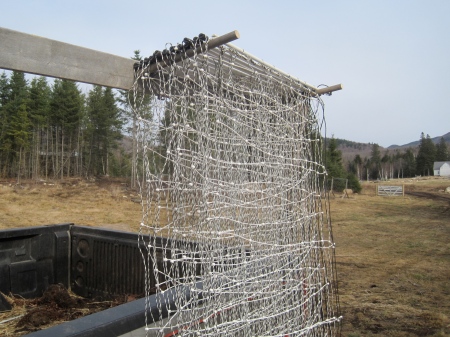 Then I climbed up into the truck bed and tied the posts tightly in the center of a length of baling twine. 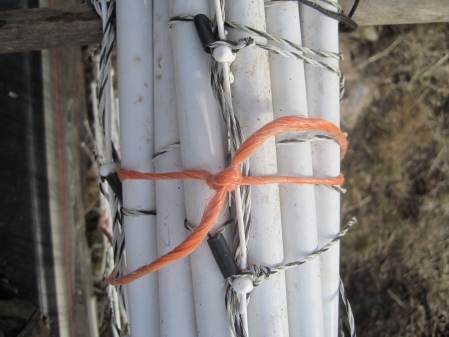 On the ground again, I rolled the straightened netting tightly to the posts and tied it with the free ends of twine. 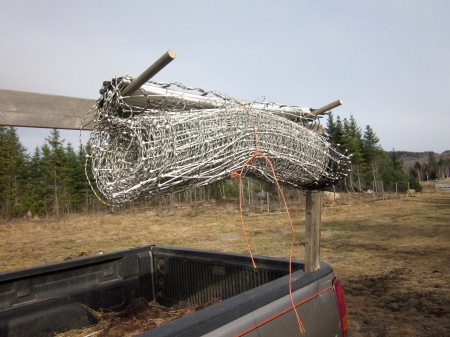 Then I lifted the tied fencing off the rods, laid it on the ground, and used the remaining ends of twine to bind the entire package one more time. 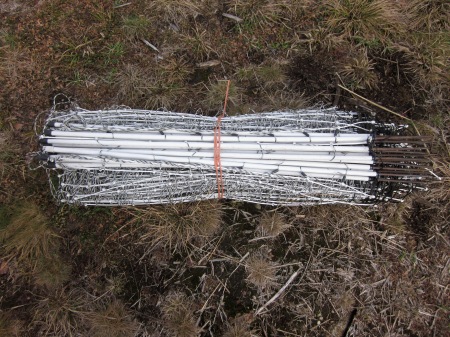 The result is a tight and tidy bundle. Just looking at one gives me pleasure. And coping with each roll of fencing takes only a little over five minutes from start to finish.

This jig will work with any of Premier1’s fencing, including their Pig QuikFence — even pig netting that has been hurriedly dropped to the ground in the confusion of loading pigs for the slaughterhouse. 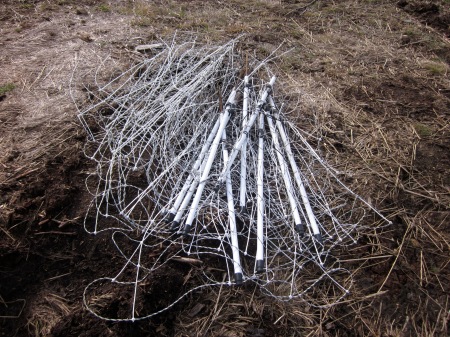 QuikFence is not as tall as other fencing, so you tap the third peg into the third hole in your crossbar, to make a shorter stretcher. Then do as before.

Feed all your posts one by one onto the jig. 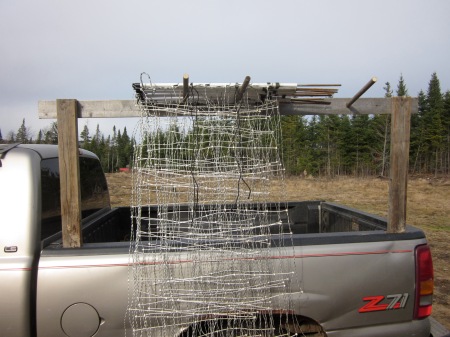 Tie the posts together and drop the ends of the twine below. Grasp the edges of the hanging netting, shake the pleats straight, and roll them snugly to the posts. Tie the whole thing with a tight knot. 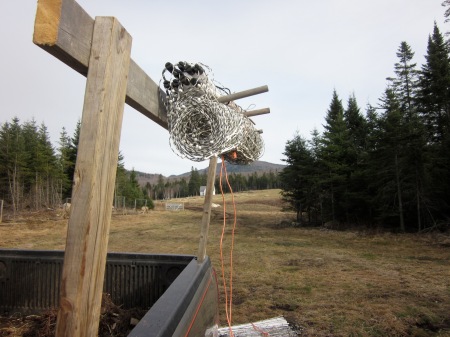 Then lift the tied roll off the jig, and use the remaining twine to bind the roll for a second time.

Putting away fence this way is very satisfying. Working mostly alone, on a limited budget, with a to-do list that is always far too long, so much on my farm is necessarily haphazard and slightly in shambles. It is heartening to look at neat bundles of fencing that seem to say, Great job! You get a gold star!

I don’t know — and would love to hear — how other farmers store their rolls of netting, however those rolls may be tied. It seems to me that an angled shelf or bracket system on a wall would be ideal, but I haven’t got a spare wall.

Instead I simply stack mine in piles under the eaves of my hayloft, where the fat bundles always remind me of Tom Kitten in Beatrix Potter’s The Roly-Poly Pudding.

This entry was posted on Wednesday, November 21st, 2012 at 6:51 am and is filed under sheep, tool belt days. You can follow any responses to this entry through the RSS 2.0 feed. You can leave a response, or trackback from your own site.