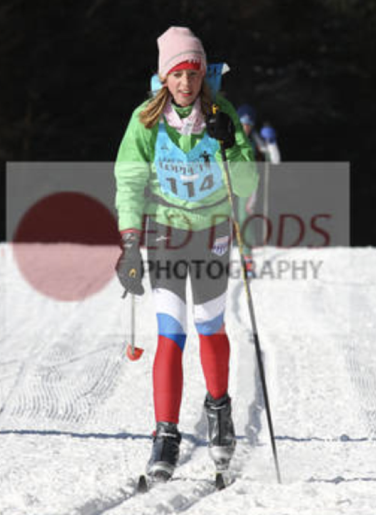 My baby girl skied the 25K Loppet yesterday, and had a great race. Her stamina and technique improve every year. It used to be her goal simply to finish.

Stop All the Clocks 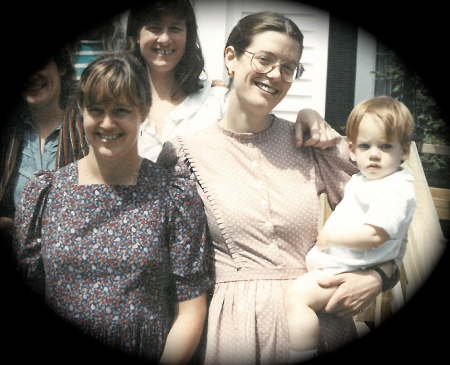 My dear friend Julia died of cancer yesterday at only 54. I was going to drive the six hours to Connecticut to see her today. The past two weeks have been a relentless race against time while our car has been marooned in the shop and I’ve battled the cold and frozen pipes. My heart is so heavy.

I find I have few pictures to document almost three decades of friendship. Above we are on the church steps at Jon’s christening in 1988; she was his godmother. At the time we shared an equal devotion to Laura Ashley. As someone cracked of this photo, “You look like Sister Wives!”

How Julia would have loved that.

I will write more when I can find words.

Sheep in the Frigid Cold 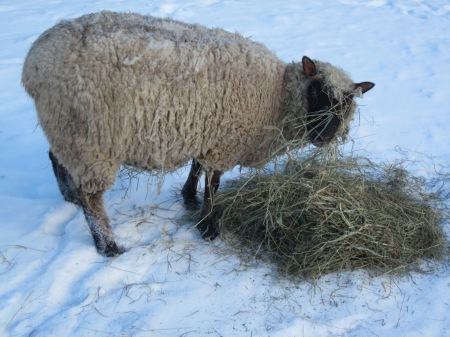 My ten ewes are getting rounder by the day. Late last summer, when life was extremely sad and chaotic, I decided (as I would probably not be keeping any lambs this year) that for simplicity’s sake I would simply breed the girls to the Clun Forest ram lamb that I was selling later in the season.

Fine. Not a bad plan, and the teenaged ram was thrilled to oblige. Unfortunately, however, I was so very stressed, I did not get a marking harness on this enthusiastic boy.

Thus I have no idea who is bred and who is not, and when lambs will start arriving. This is a problem. It is -20° F today and the past two days have seen -25° and -32°.  A lamb born wet and helpless in these bitter temperatures would not last long.

Moreover there is a good chance that one of the novice ewes will be first to lamb; as these young girls did not have nursing lambs at foot last fall, they would have been in prime shape to be the first ovulating. A maiden ewe is occasionally so traumatized by the pain of birth that her mothering instincts don’t kick in and in fright she abandons the crying baby instead of caring for it.

My nerves are shot.

Just managing the cold to keep the animals safe has been challenge enough. I have turned everyone out only for a couple of hours at a time. The teenaged calves have been particularly restless in their stalls and eager to get out. However when I open the back barn door again all the animals burst from the run-in shelter and head for me at full speed, led by Lucy’s horse Birch at a gallop.

Yesterday a mean wind blew up, making the trip to manure pile dragging my muck bucket a tortuous experience. With each foray my glasses froze and then fogged on re-entering the barn. Wind-whipped tears froze on my cheeks. Finally I took the glasses off altogether and mucked blind, just piling the dirty litter in the barn aisle. When it warms up enough to tackle it I will have a big job.

And then there is mucking the deep bedding out of the sheep stall, a monster, four-day task that had been on the schedule for this frigid week and had to be scuttled. I hope to start it tomorrow when it hits a balmy 10° above zero.

In the meantime: please, God, no lambs quite yet!

The past few days have seen our temperatures see-sawing up and down. Below zero, then warming above freezing with rain, then plunging to zero again. The winds accompanying these colliding weather fronts have been brutal. We’ve had snowfall with white-out conditions, where you could barely see ten feet in front of you. Meanwhile the scouring winds have scraped the ground bare in many places, only to dump drifts in others.

DH had old college buddies up for a weekend of skiing, so apart from barn chores I spent most of my time cooking and cleaning. Neither is my favorite task but it was reminiscent to me of the peacefulness I felt when I was tied down by small children. My life was circumscribed and my goals were limited. Picking up toys. Making beds. Reading aloud. Folding small shirts and pants, matching tiny socks.

This weekend as I grated potatoes for breakfast hash browns or skimmed cream for ice cream or polished the table, I felt a similar rush of pleasure in domesticity.

Perhaps I enjoyed it even more acutely because it is due to stay below zero all this week — it is -10° F now — and I know I must spend four days mucking the deep bedding out of the sheep stall. 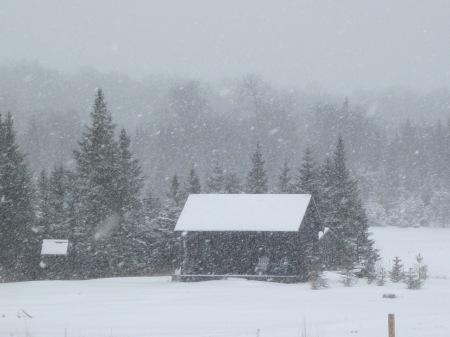 Yesterday it was snowing at morning chores. My skiers DH and Lucy were doing a happy dance. (Actually, as by nature they are both far more reserved than I am, it should be noted more accurately that they were smiling with relief. DH exclaimed, “All right!”  and Lucy said in a pleased tone, “Yay!”)

The animals ate their hay on a fresh white tablecloth. 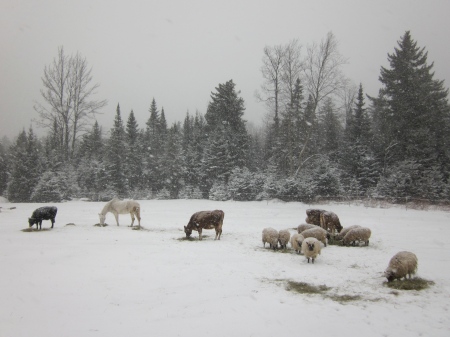 We received two inches of powder before the sky cleared in the afternoon and the temperature began to drop.

This morning it is -19° F. The house timbers are creaking and thudding in the cold. Winter is back! 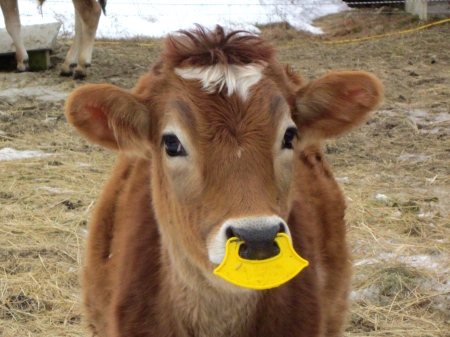 Because they had no genuine Cotran weaners immediately on hand, Jeffers Livestock kindly sent me some QuietWean calf weaners to try. Jeffers is considering stocking the brand, and said they would be happy to hear my opinion.

The results are in. So far, so good!

The main hassle of all weaning rings is the handling required to put them in and out. Getting halters on 300-pound calves that are not hand-tame is not a job for the faint of heart. However all my calves are accustomed to coming into their stalls at night, and in the confines of the small space it can be done with a reasonably limited amount of panic (on their part) and trampling (of me). Once the calves are haltered and tied, the job is quick and painless.

Still, you can see that if your weaners are prone to falling out, or otherwise fail and require replacing, you will quickly develop a deep rage and hatred for that particular brand as you grapple repeatedly with big, anxious, jostling calves. The Jeffers knock-offs did that for me.

The first thing you notice about the QuietWean weaner is that it is light and very smooth. Unlike the Cotran weaner, handling the QuietWean is not like grasping a pricker-bush. Moreover there is no tightening bolt to lose or parts to break. This is a very, very simple design. If it works, that seems a plus. 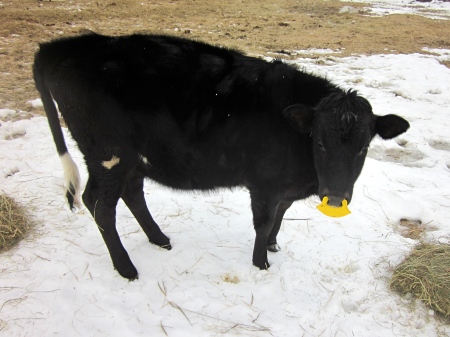 Hooray! Neither calf could nurse. Stewart stood by his mother looking sheepish. Foiled! 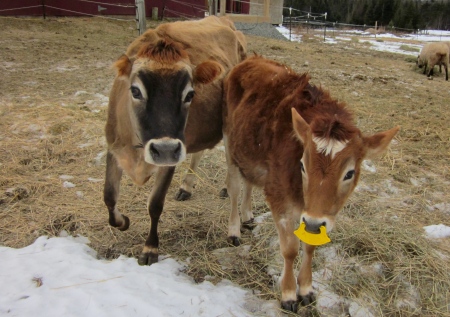 Watching the two calves eat their breakfast hay, it seemed to me that the QuietWean might be slightly easier for calves to live with, as there are no spikes to catch on anything inadvertently. 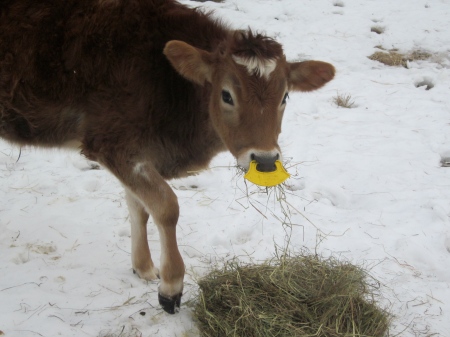 One the other hand, the same lack of spikes made me wonder how useful the QuietWean would be with a really hungry, determined, persevering, clever calf.

On their website the folks at QuietWean state that in their own trials, fewer than 10% of calves learn to nurse with the QuietWean on — and then (quite honestly) go on to admit that other trials show a 5-30% rate of calves still able to nurse. I greatly admire their frankness. Especially as, from casual reports I’ve had from friends, roughly the same statistics seem to hold true using almost any weaning device … except:

The answer with weaning rings seems to be that if you find something that works, don’t mess with success.

It did not occur to me for one minute to trade out the Cotran weaner in clever Henry’s nose. 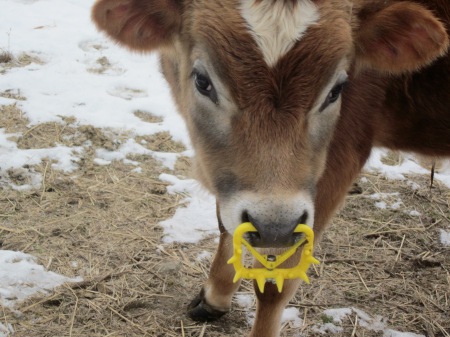 In the future I will keep both Cotran and QuietWean weaning rings on hand. The knock-offs, meanwhile, have gone straight to the trash.

On Monday morning, while putting out hay, I found black feathers strewn across the snow in the barn paddock. A few steps further I found large pieces of wing, with bone attached. Then a fan of tail feathers. Uh-oh. Something was eaten here.

Thank goodness, the feathers were too long to be from one of my Black Australorp hens. It must have been a crow. But how would a coyote have caught a crow? Maybe it was sickly and on the ground, I thought.

(Because they are a predator and also eat carrion, crows often suffer from heavy worm infestations. Back in the ’70s when I had state and federal licenses for handling wildlife, I was often presented with crows that were too thin and debilitated to fly; I wormed them, kept them for a week to feed them back to fighting weight, and then released them.)

But as I scanned the snow I realized there were no footprints. No coyote had trotted through my paddock. The attack on the crow must have come in the dark from the sky.

Owls are a major predator of crows. Owls can see in the dark, which crows cannot; an owl can swoop into a flock of sleeping crows and snatch a bird from a branch with barely a whisper of wings. For this reason crows fear and detest owls, and when crows find an owl sleeping in the daytime they will mob it and scream warnings for hours.

Yesterday morning I was mucking the barn when I heard crows beginning to congregate, yelling, in the tops of the yellow birch and balsams at the edge of the barn paddock. I immediately dropped my pitchfork. Had they spotted the owl? I went outside to see.

I found all the cattle and Lucy’s horse Birch standing motionless, not eating, staring at the woods with heads lifted and ears pricked, listening to the alarm calls of the crows (could the livestock understand a specific message, or just a scream of danger? Such speculation fascinates me). Unfortunately for any claims of sheep intelligence, the ewes seemed not to notice the raucous commotion at all. They kept their heads down, eating stolidly.

There were about eight crows, screaming and hopping from branch to branch. I could not see any focal point for their attention in the woods; in fact, several times a crow swooped over the paddock, wheeling and cawing. Finally I realized that they were not excited over an owl in the trees — they had spotted and were exclaiming over the dismembered remains of their fallen compatriot on the ground.

(I think I was thirteen or so when I first read Konrad Lorenz’s wonderful book, King Solomon’s Ring, with his explanations of jackdaw behavior. Ever since I have been inordinately fond of crows, ravens, and jays — all the clever “nuisance” birds.)

After ten minutes of unceasing din, I watched as one crow, braver than the rest, finally lighted on the ground near the scattered black feathers and bones. Crows often walk, rather than hop like other birds; this gives their gait an endearing swagger. While his pals in the trees continued to yell warnings, the brave crow strutted across the snow, cocking his head to inspect the various meager remains. Only the constant twitching and rearranging of his wings revealed his nerves.

At last the brave crow jumped into the air and flew away, cawing. I imagined him reporting, “This fella’s too far gone for rescue!” The whole flock followed and in a minute they were gone.

The barnyard was quiet again. The cows and horse returned to their hay. The sheep never looked up.

Fairhope Farm
Create a free website or blog at WordPress.com.