Back and Playing Catch-up 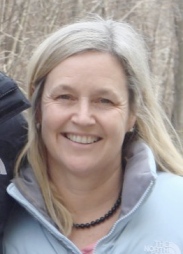 The last three weeks have been such a crazy time of multiplying emergencies and cascading emotions that I have felt curiously numb and incapable of concentration on anything except the next dogged task.

On Saturday DH, our friend Larry, and I drove to Connecticut to attend the funeral of our dear friend Julia. It was a beautiful service, with the white New England church packed literally to the galleries with hundreds of friends. But the combination of the eleven-hour drive and long bouts of tears left me feeling almost drugged with exhaustion and a persistent disbelief that any of it could be true. Well, it’s very nice to see everyone, Jules, but I’m ready for this bizarre joke to be over now.

Meanwhile the weather has yo-yoed from being stuck at 32° below zero, up to 55° above, then back down below zero again —  freezing water pipes in the farm apartment and the barn paddock, then miring the driveway in foot-deep mud, then freezing the mud into tooth-rattling ruts and plate ice.

The extreme temperature swings were accompanied by 70 mph winds that roared like a passing train. I could not stand up against it to drag muck buckets to the manure pile. Trees cracked and branches fell. As all the hay I put out for the animals took to the sky, I thought yet again, “I must build myself some hay feeders!” Perhaps I can get to it in April.

The fierce winds also tore all the house-wrap off the west end of the garage. It now hangs in limp shreds in nearby trees. 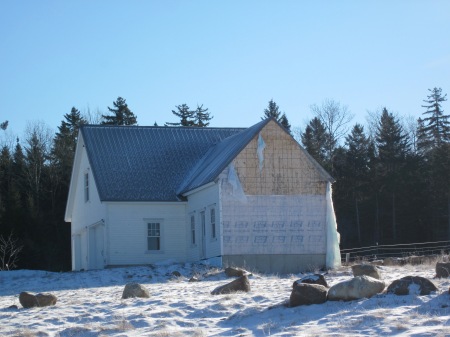 This face of the building was not clapboarded because the future house will be attached to it. So I must get the paper house-wrap back on before the OSB sheathing is destroyed by weather.

What can’t be seen in the photograph is that below this face, Allen half-dug the future basement. So the peak of the ell is probably thirty feet above the ground. The uneven ground.

D has kindly lent me his extension ladder. Larry has promised the loan of his staple hammer. Jay is going to deliver a 9-foot-tall roll of fresh house-wrap. All I’ll have to do is cut the paper, climb the ladder, and tack it all in place.

Ugh. Even if I can make the ladder steady on the uneven surface, I’m very afraid of heights.

In such situations I always remind myself of Pa Ingalls’ favorite proverb: “Needs must when the devil drives.” The job has to be done so I will just have to find a scrap of bravery somewhere.

“Luckily” the weather is too cold, windy, or expected to snow until the weekend. (This morning it is twenty degrees below zero.) So until then I can address myself to the rest of my long list, and gird my loins.

This entry was posted on Monday, February 4th, 2013 at 8:50 am and is filed under Uncategorized. You can follow any responses to this entry through the RSS 2.0 feed. You can leave a response, or trackback from your own site.

2 Responses to Back and Playing Catch-up