Or: The Full Story of Mulberry’s Lambing in 2014

March 6 of last year was a day of faculty meetings. The boarding students had just left for spring vacation. At chores that morning I noticed some of the pregnant ewes looking “thoughtful,” so at the 10:30 coffee break I figured I should check my girls. I raced home and jumped in my truck.

At the barn I found that a few minutes earlier, my ewe Lily had given birth to a handsome set of twins at the exact moment that Mulberry had given birth to an enormous ram lamb. All the lambs were wet and wailing, the ewes nickering anxiously, and the flock milling.  I grabbed a towel and waded in. I spent fifteen minutes pulling both ewes into jugs, toweling lambs, and plugging in a heat lamp. It was 4° F.

I was very aware that due to her bout with mastitis in 2012, Lily had only one functioning teat. I decided to play God. I made an executive decision and switched the lambs, giving the twins to Mulberry and the big single to Lily. Neither ewe seemed to notice anything. Once everyone was dry and fed I had to race back to work.

At the lunch break an hour later I drove down to the farm to double-check the new mamas. To my horror I saw a tiny limp form flat in the straw in Mulberry’s jug. Mulberry was trampling the body as she licked her new “twins.” Mulberry had given birth to a second, minuscule lamb.

The tiny ribs barely moved. The lamb was wet and cold and stuck with hay. I immediately unzipped my jacket, pulled up my shirt, and laid the slimy, frigid body against my warm skin, the one place in the barn that was almost 100° F. I drove straight home, praying for the lamb to live.

She was an ewe lamb, barely five pounds. At home I dried her and wrapped her in a towel. I heated a bottle of Jersey milk.

Then I returned to the meetings, with a bottle in my hand and the lamb under my shirt. The lamb was still too cold to feed. If a baby is too chilled, milk pools undigested in the stomach and causes more problems. I kept the lamb against my skin and waited. As I listened to the faculty conversations I felt the icy body slowly thaw and begin to shiver convulsively. Shivering is a positive start.

In less than an hour I was able to feed the lamb some of Dorrie’s milk, topped up with extra cream. Her sucking reflex was weak but I was patient. Gradually the shivering slowed and stopped.

At the next break I wanted to deal with the huge, bloody, engorged umbilicus. I’d never seen a cord like this. It looked like a fire hose against her belly. 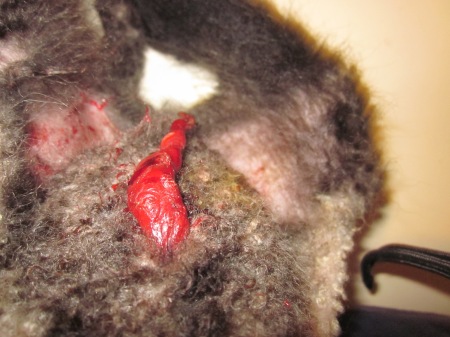 They make umbilical clips for shepherds but I’d never needed one. As a substitute I dug up a bull clip and soaked it in rubbing alcohol. It worked fine. 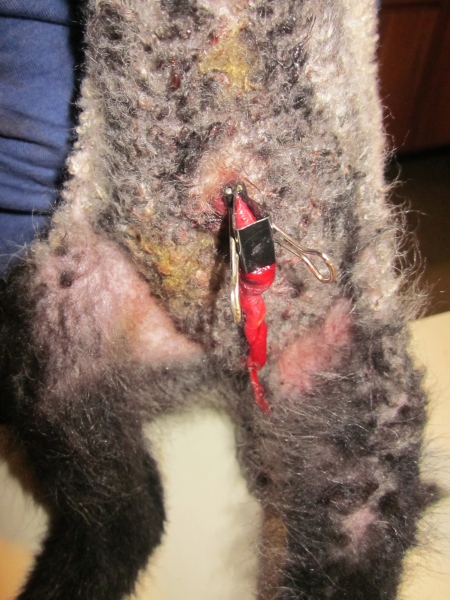 (In a few days the bloody cord dried up and fell off.)

I slipped the lamb into my smallest jacket. It was gigantic on her.

Then we went back to the faculty meeting. By the end of the work day, the lamb no longer had to be against my skin but could sit up in my arms.

That afternoon and evening, and at various times over the next twenty-four hours, I would try to reintroduce the lamb to the barn, to her twin brother, and to Lily, her foster-mother.

The sight of the tiny lamb alongside her twin brother, almost three times her weight, was comical. (I had begun calling the lamb Cider, after Pa Ingalls’ childhood nickname for his daughter Laura Ingalls Wilder: a “little half-pint of sweet cider half drunk up.”)

But the real problem was not so much Cider’s size as her feeding. I tried and tried but could not get her to nurse from a teat. Lily had plenty of milk and was willing to be distracted by a snack, but Cider would not latch on. In the end, I milked colostrum into my bottle for the necessary antibodies and took Cider home. She spent her first few days on a heating pad and towel in a recycling bin on the kitchen counter.

Within three days she was scrambling to jump out of the bin, so I set up our old oak playpen in a corner of the kitchen. 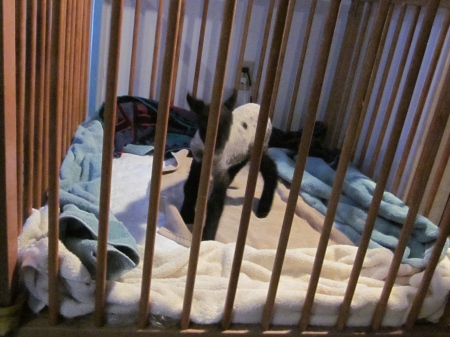 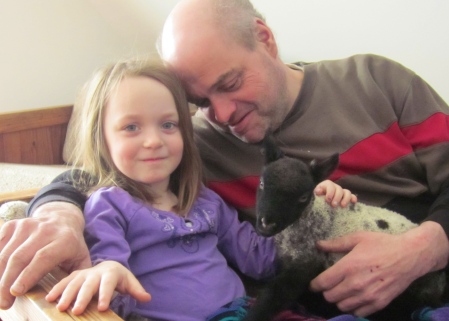 By now it was obvious that Cider’s legs had problems. Cramped for space in utero with her enormous twin, Cider’s bones were twisted.

One fetlock knuckled over completely and the other leg was so bowed she was walking on the outside edge of the hoof.

In the early days Cider did a lot of resting. 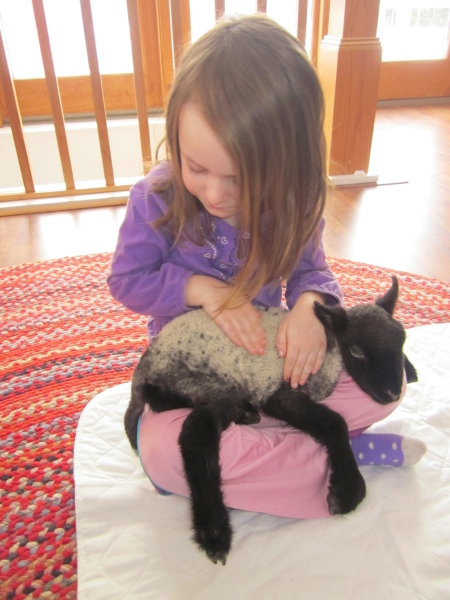 However, I splinted both legs with padded aluminum finger splints and Vet Wrap. At first Cider collapsed in a heap of stiff sticks but she soon learned to maneuver.

Lucy took this very short video of Cider prancing and screaming impatiently for her bottle.

She was an adorable tyrant. She would scream for me as soon as she heard me stir at 4 AM. To keep her quiet while we watched TV in the evening, I held her sleeping in my lap.

Bottle babies are always a temptation to poor decisions. They are so cute and their devotion so flattering. When I was eighteen years old I walked around with a raccoon on my shoulder. But I learned long ago that to raise an animal to be imprinted on humans is to warp its psyche. It is unfair to the animal and can be dangerous to both. I knew Cider should not be watching The Good Wife. She needed to learn she was a sheep.

As soon as possible, I began taking her to chores with me. I put her in with the flock while I mucked stalls.

Cider was not happy. 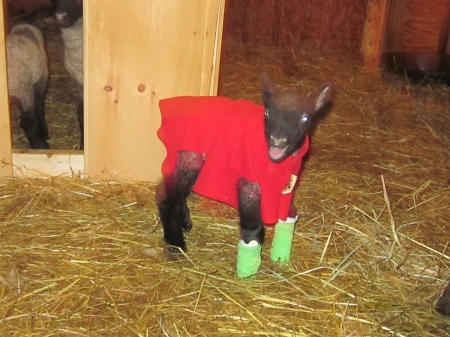 It was hard to watch the ewes knocking her aside and the lambs playing with her roughly. She quickly learned that the lamb creep was her safest haven. Here she is curled up with her twin brother. I always wondered if they recognized each other somehow.

Gradually I lengthened the time Cider was at the barn and the time between bottles until I was feeding her three times a day and she was in with the flock 24/7.

Still, she was easy to spot in the crowd.

Though she remained petite, Cider grew quickly. Here she is at 5 weeks.

And here she is at 11 weeks. I weaned her at three months.

Though her legs were straighter, they will never be perfect.

She had been so tiny and fragile I had waited until she was four days old to splint them. I’d waited too long.

But it will only mean that her hooves will wear unevenly. I can keep them trimmed.

Yes, I kept Cider in the flock. She is smaller than normal, her front legs are slightly wonky. But she is pretty, her bloodlines are excellent, and her problems are totally due to environmental factors. More experienced shepherds have told me the issue of wildly disparate twins is caused by poor nutrition at breeding time. (I’d had another pair the year before, while I was in Florida, and without my intervention both lambs had died.) I breed in September, which is often just when the ewes are coming off pasture and making the switch to hay. Both cattle and sheep will “chase green,” nibbling poor grass to nubs and ignoring the hay. Now for those first weeks I confine the flock with no grass option. They are glum but they eat their hay. So far, no more problems.

Cider is as wild and wary as any of the ewes now. Occasionally, however, I catch her looking at me … and I wonder if she’s remembering my lap and The Good Wife. 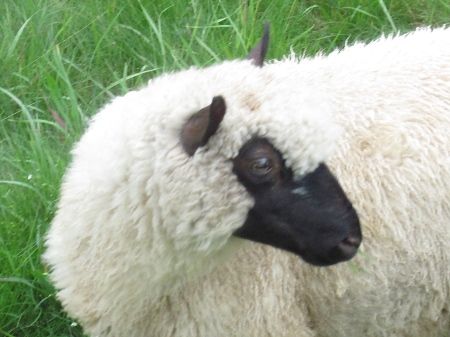 This entry was posted on Monday, March 2nd, 2015 at 6:43 am and is filed under sheep. You can follow any responses to this entry through the RSS 2.0 feed. You can leave a response, or trackback from your own site.