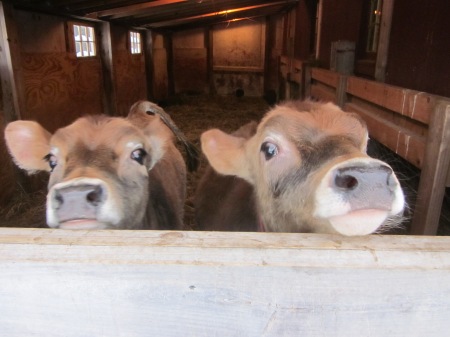 My youngest steers, foster calves raised as “twins,” actually do look like twins.

Conway Twitty and Luke Bryan (named by my friend Allen and his five-year-old great-granddaughter, respectively) are unrelated calves. Conway, though two weeks younger, was noticeably bigger when they were babies; Luke’s mama was a first-calf heifer so Luke was born small.

Apart from that, however, they are both classic Jerseys with no white markings and are as alike as two peas.

After the size difference disappeared, I could tell them apart for their first few months because Luke had a dull red collar and Conway a bright red collar. But calves outgrow collars and I wondered what I would do then.

Why is it important for me to be able to tell my steers apart? I should say for animal husbandry reasons, and of course that’s a factor. When you’re monitoring herd health it helps to know instantly by sight if you’re looking at Moxie with her bad rear hoof and dry quarter, or Dorrie who is due to calve any day. As the real Moxie and Dorrie look nothing alike, this particular scenario is easy. However if I noticed that one of the “twin” steers seemed off, I would waste a lot of time trying to figure out which calf to size up and potentially treat.

However the real reason is much simpler. I don’t like handling large animals every day that I can’t instantly identify. It doesn’t feel right. It doesn’t feel respectful. My steers only live about a year but during that time I want them to be safe, comfortable, and, for me at least, “unique in all the world.”

So I wanted to be able to tell these twins apart. I thought perhaps I might get lucky and one steer would stay light and the other would darken. But no. Both are turning dark.

And here is Conway Twitty the same day, at 3.5 months old. (I can identify them in all these photos because other shots show their collars.) They are lounging in a big box stall. 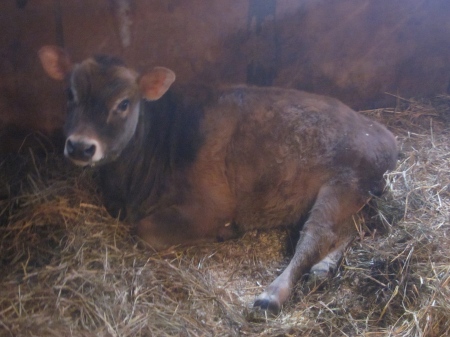 I’m aware the “twins” have slight differences but I can’t figure out exactly what those differences are. I’m sadly hopeless at the magazine games that want you to find the changes between similar photographs. My eye merely registers, “Cute Jersey boys!” 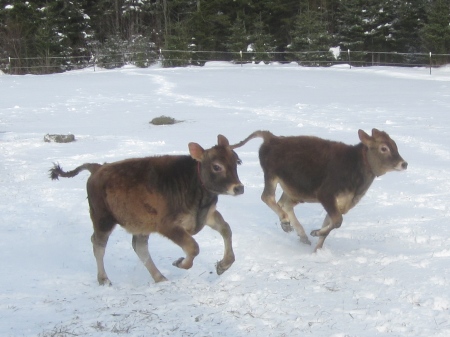 In the end I decided to try some old plastic collars I’d bought years ago from a catalogue, thinking they might work for my sheep. The collars had been far too bulky for sheep — but it turns out they are fine for calves. I wrote each calf’s name on his tag.

Now I can see at a glance that it is Luke Bryan who is always last to come in at night, hesitating at the doorway and debating, long after all the other cattle are in their stalls and eating their supper.

I remind Luke of the children’s book, The Story About Ping.

“Don’t miss the boat, Luke. You wouldn’t like to stay out all night.”

Luke snorts at me and considers dashing out again. I pretend to pay no attention. In the end he always gallops in and stands at the manger next to Conway, shoving and jostling for his share of grain. I bolt the stall door.

Then they curl up together. And I can tell which is which. 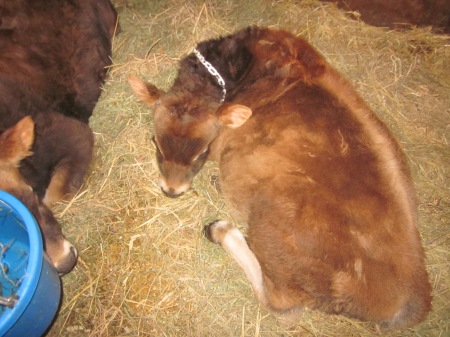 This entry was posted on Saturday, March 7th, 2015 at 6:54 am and is filed under cows. You can follow any responses to this entry through the RSS 2.0 feed. You can leave a response, or trackback from your own site.

One Response to The Doublemint Twins