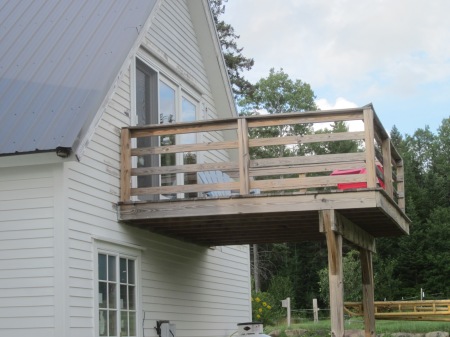 All summer I’ve been meaning to replace the railings on the apartment deck. Gary and I built the deck in 2013, long before I’d had a plan for the house, and our only concern for the railings had been safety.

Now that the house is up, I have wanted the railings on the apartment deck to match the main house porch.

Using a credit I had at Lowe’s, on the way home from a trip to Vermont I stopped and purchased a few dozen balusters.

I figured the job would take about three hours. Since all the old rails were treated lumber, I could reuse them. I would just pull them off, cut them down, rehang them, and screw in the balusters. Easy-peasy!

[The top of the house looks so ratty because the builder scraped it last July for painting, and then never painted.] 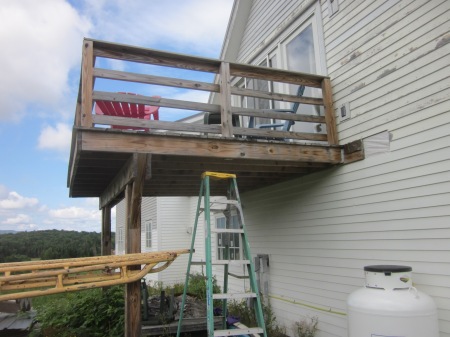 It was very, very hot but my tenant was away and I had to get the job done. I assembled all my wrecking tools.

Just getting the old rails off, and removing all the dozens of nails, took most of the hours. Sweat poured down my face and soaked my shirt. The remaining posts wobbled in place like loose teeth. 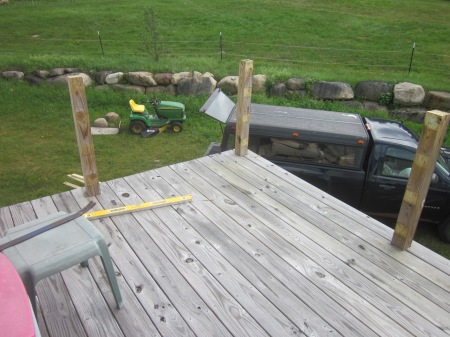 I wasted another hour trying to cut down the old rails and reuse them. They were cupped and twisted. The 1×6 capping boards had dried into long tortilla chips that cracked across at the knots.

OK, time for Plan B! I drove into town late that day and bought fresh 2x4s for rails and 2x6s for caps.

The next day went faster. After taking down the previous day’s sad efforts, I got up the new rails on the east side, countersinking the screws.

The five-year-old posts were themselves dried and twisted, but I did not have time or energy to pull them out. I did the best I could. Allen’s voice said in my ear, We ain’t buildin’ a church.

My backyard shop for cutting the long boards had to be a bit creative.

I worked my way around the deck, drilling the countersink holes and then bracing each post plumb before drilling in the rails. 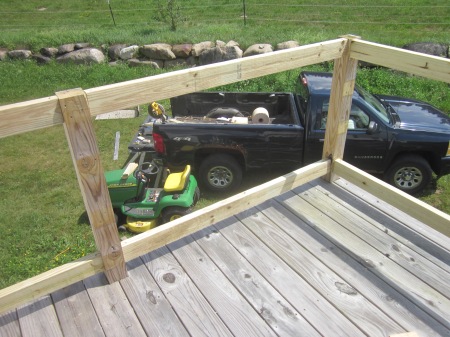 I laid out the first capping board, hiding the screws by drilling them in from below.

Next, balusters. Math is always baffling to me, but I managed to figure out equal spacing down the length of the rails, marked it top and bottom, cut the balusters to fit, and, standing on my ladder, drilled them in. 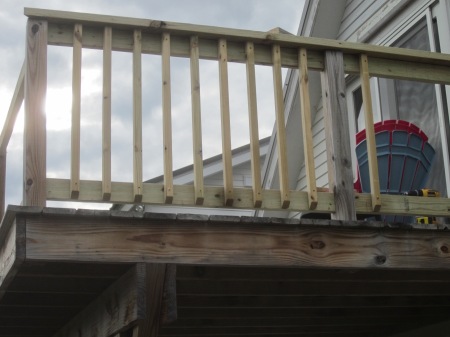 Oh dear. Something’s wrong. I squinted at the balusters with a sinking heart. I went inside to my computer to check. Yes, code baluster spacing is 4″ maximum, and mine were spaced at 4.25″.

I climbed back up the ladder, took down all the rails, rejiggered the math, re-marked the rails, and put the balusters back up at 3.75″ apart.

The next day marked Day Three of my “three-hour project.” Of course with all the other farm chores, each “day” was only a few hours, but it was still a bit discouraging.

The temperature was in the 90s. It was too hot to wear a baseball cap to shade my eyes. My t-shirt and jeans were clammy and sticking to me. Sweat ran from my hair to puddle in my glasses whenever I looked down. I took my glasses off. Better to be fuzzy-sighted than underwater.

I had already put up the capping board on the west side of the deck. 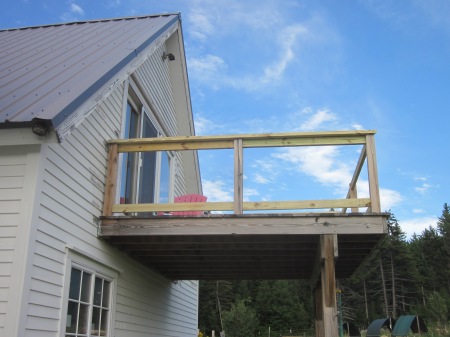 The job now was to cut and put up the capping board on the long south side. This board had a 45° angle on both ends. I could not use the old board as a template because it had shrunk almost a full two inches.

Time was running out. I was due to leave for Ami’s surgery and had a thousand chores to accomplish before then. But I had left this board to cut when I was fresh because I knew that with my difficulties with math and spatial relationships, the odds were very high that I’d reverse the angles or cut the board too short. I went over it and over it in my mind before I cut. Then, with difficulty, I levered the heavy 12′ treated board up onto the deck, climbed up, and lifted it into place.

And that’s where I had to leave the project before I drove to Connecticut. The steam in the picture is from the sweat in my pocket. 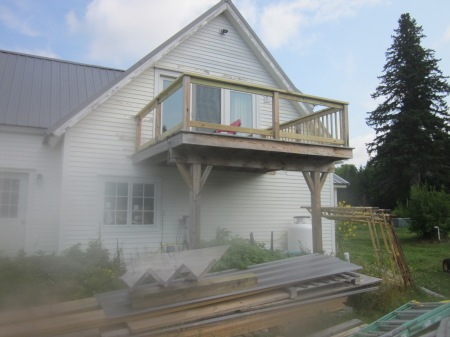 Though my tenant assured me he would not fling himself through the openings to fall off the deck, the unfinished railing has been a reproach to me ever since. Unfortunately, between work and other priorities, I’ve had no time.

However yesterday he was away hiking, and I cut and put up all the remaining balusters.

This entry was posted on Sunday, September 23rd, 2018 at 5:24 am and is filed under dream house, tool belt days. You can follow any responses to this entry through the RSS 2.0 feed. You can leave a response, or trackback from your own site.